This year’s faculty gathering centered on the theme of becoming.

Naomi Kasa and I had attended the 2017 Lilly Conference in Anaheim, where Stephen Brookfield had given a talk on The Five Forms of Becoming a Teacher. The idea of using his frames as a theme for this year’s gathering resonated with the faculty development committee and we went to work planning the event.

As the gathering started, our hearts were encouraged by the time of worship, led by April Westbrook.

Pete Menjares shared a devotional and introduced two verses that introduced the gathering’s theme and set the tone for the two days:

Dear friends, now we are children of God, and what we will be has not yet been made known. But we know that when Christ appears, we shall be like him, for we shall see him as he is. 1 John 3:2 (NIV)

See, I am doing a new thing!
Now it springs up; do you not perceive it?
I am making a way in the wilderness
and streams in the wasteland.
Isaiah 43:19 (NIV)

Five courageous and wise faculty members gave short talks about the ways in which they are each becoming.

Roxanna Ochoa spoke about her own racial identity, as well as the ways in which our students’ experience race. She encouraged us to avoid assuming that our hispanic students come from the same culture. Hispanics come from 20 different countries and have vastly different cultures. She also cautioned us to avoid assuming that we know how a particular student identifies themselves, in terms of race or ethnicity.

Sylvia Kane expressed her passion for pedagogy. She stressed that straight lecturing is an ineffective way to get facts across, or to achieve long-term retention. Sylvia shared that other professions have a regular habit of reflecting on their practice. Doctors have other medical professionals regularly observing their work. Lawyers “practice” the law and argue their cases before the court. Faculty rarely have anyone observe their teaching, nor do they obtain consistent feedback on their pedagogical approaches.

Kerry Moore talked about her experience as a new chair last year. Her role seemed to be constantly evolving with the next incoming email to things she didn’t realize were a part of the job. She found herself shifting into trying to “perform” her way into feeling adequate as a teacher and as a chair. A book she has found helpful in combating some of this perfectionism is The Liturgy of the Ordinary.

The patterns we set up in our daily lives are what shape us.” – Kerry Moore

Sandie Morgan spoke about becoming whole-hearted, spiritually. She reminded us that Matthew 28:19 can be most closely translated not as “go” – but, “as you are going.” As a first generation college student, she remembers being told by a family member that she wasn’t as smart as the thought she was… This impacted her throughout much of her educational experiences, as she fought against that demeaning message, echoing in her mind. She told that story to illustrate the role of vulnerability in becoming and how important that is to integrating faith and learning for our students.  She quoted Dr. Brene Brown who emphasizes the role of worthiness in how our students experience belonging.

Roger Heuser shared a couple of experiences in which he was particularly vulnerable in his career, politically speaking. He talked about how the implicit assumptions we make in our culture are just as important as the stated organizational policies. If we change the faculty handbook, it still won’t change how faculty find what kind of governance and leadership are expected and accepted, he emphasized. Roger stressed the need for us to leverage our Pentecostal imagination, as described in Acts 2 where “sons and daughters prophesy, the young see visions, and old dream dreams.”

We need all faculty – those who are new, and those who have been around – to not stop envisioning and dreaming about Vanguard’s future. Every time a faculty member retires or moves on, we lose a culture carrier, a voice and a dream.” – Roger Heuser

In a social culture that values telling more than asking, and doing more than relating, humble inquiry is learning how to create an environment where people feel psychologically safe to be vulnerable, be honest, and safe enough to ask difficult questions within the community.

Pete Menjares introduced us to our new faculty on the first day of the gathering, as well. In addition to hearing about their professional backgrounds, we got to hear some ‘becoming’ poetry that helped us learn even more about them. Thanks to those new faculty who shared during this portion of our gathering and to Pete for leading them through that exercise.

In the afternoon, we had three breakout tracks running. During the first set of sessions, Liz Powell presented about student spirituality, Paul Turgeon spoke about de-escalation, and Tara Sirvent shared on student success and advising.

The final breakouts were on study abroad trips (with Kayli Hillebrand and Sandie Morgan), Canvas inspiration (with Naomi Kasa, Liz Powell, and Bonni Stachowiak), and partnering with students in research (with Tara Sirvent).

I shared on digital pedagogy at the start of the second day and attempted to play the first 90 seconds of an episode of Coaching for Leaders about parenting. David Pecoraro read the poem: The Gate of the Year.

At one point, I shared about looking at who authored our textbooks and other assigned reading to determine if the voices are diverse enough to serve our students well. For more on this theme, here are Seven Ways to Not be a Complicit Academic.

At the conclusion of my presentation, we played a team version of Kahoot.it. The winning team was made up of: Naomi Kasa, Gary Tyra, Derrick Rosenior, and Jon Moore. Congratulations on such a demonstration of your digital literacy. Yes, we are aware that Naomi was of great help to your team, but I promise she had no idea of any of the questions, in advance. Ted Lorance’s team was holding their own until the very last few questions.

Below are the questions that were in the game, as well as some links to related resources:

I was very impressed that our VPs shared so meaningfully. They had little time but were so transparent. Their remarks helped me see their faith commitment at a deeper level.”

After that, the Provost and President talked about becoming Vanguard. After the Vice Presents, Provost, and President shared, the faculty gathered together and prayed for them.

Dr. O’Quinn was candid about the ways in which race has impacted her throughout her career. She also revealed a timeline for the organizational restructuring that will be occurring in the academic house in the coming year. If you weren’t able to attend the gathering and would like more information on the timeline, please feel free to send me an email and I’ll forward that portion of her slide deck to you.

Dr. Beals echoed Dr. O’Quinn’s transparency, as he shared a very personal way in which his faith has been shaped. He quoted Murray Dempster as telling him:

He also shared about a therapist’s advice:

You need to grieve the loss of your future, or you will never be able to live in the present.”

We concluded the faculty gathering by having lunch together, followed by a celebration of the WSCUC reaffirmation. 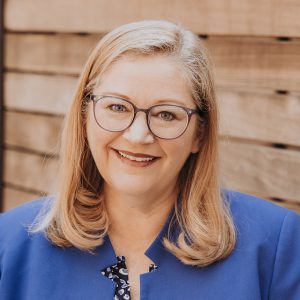