On November 25, 2019, I had the privilege of presenting a paper titled “The Academy, Imagination Formation, and Social Media” at the American Academy of Religion (AAR) Annual Meeting. Held jointly with the Annual Meeting for the Society of Biblical Literature, each this conference brings together over 10,000 scholars and practitioners in the field of religious and biblical studies. This year the conference was held in San Diego, Calif. 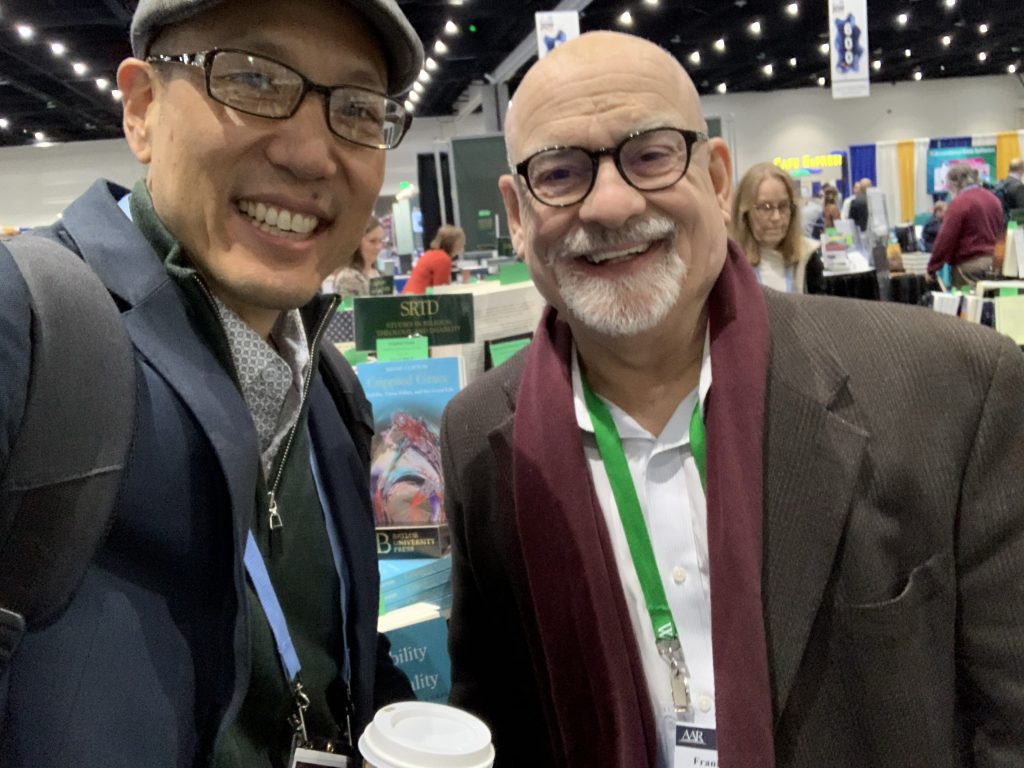 My paper was submitted and accepted for the Ethics Unit—one stream of whose call-for-papers held the theme: “scholars and the use of social media to create new publics.” This theme captured my attention in large part because of my conviction that social media is a powerful and potentially transformative tool to be used by scholars (and non-scholars) to put forth visions of truth, goodness, and beauty, ultimately for the sake of the building of the Kingdom of God.

The premise of my paper was, in essence, as follows: Arguably, the point of scholarship is not only to make advances in the enterprise of human knowledge, but also to bring such knowledge to bear on society for its flourishing. Scholarship should make a social difference. Consequently, if an Augustinian theological anthropology is somewhere near correct, then more than what we believe, we—as creatures of love—become what they behold. And the sites that we, as a society, behold more frequently and consistently than any other are the sites of social media. Thus, if as scholars we seek to produce work of transformative value, we would do well to utilize the various sites of social media to disseminate our work. (Much like this blog post itself!)

My main contention was that: what we become is a function more of what we behold than what we believe: for what we behold are the things we love and the things which shape our loves. This point holds for our growth in Christ-likeness (consider: “And we all, with unveiled face, beholding the glory of the Lord, are being changed into his likeness from one degree of glory to another; for this comes from the Lord who is the Spirit” [2 Cor. 3.18, ESV]); as well as for many other aspects of our lives such as when a young girl, who seeks to become beautiful like her mother, beholds and then mimics her mother’s way of putting on make-up; or when a young boy, who seeks to become a great baseball pitcher like his favorite player, beholds and then emulates the player’s stance, “look,” and mannerisms down to a T. Both intentionally such as with our sanctification and perhaps more subconsciously in the case of makeup and baseball—whatever the case, we become what we behold.

In my paper, I considered an anticipated objection: namely, that the use of technology for education, let alone scholarship, is detrimental to learning and to society as a whole. Some such objectors may even cite studies that show how “learning” on technological devices is less effective and perhaps inimical to the process of learning itself. But, as I pointed out (as gently as possible), one must wonder whether such objectors would likewise have complained about the first printings of the Gutenberg press. After all, the printing press too is technology. (On this note, I recently learned by reading Allan Bloom’s classic work The Closing of the American Mind that Nietzsche himself (no friend of Christianity) argued: that “the newspaper had replaced the prayer in the life of the modern [man]” and that “now television replaced the newspaper.” So, when considered historically, my raising the counter-example of the Gutenberg press seems justified.)

Yet the objection, presumably, isn’t that technology as such is detrimental. Rather, the argument is that every technology has a particular mode that is inherent to it, and that the mode inherent to the technology of television is antithetical to education. Education is not entertainment. Scholarship is not social. More to the point, the objection seems to go: the ideology embodied in a book is different from, indeed superior to, the ideology embodied in social media.

But, I went on to argue, what’s the alternative? The sites of social media aren’t going away anytime soon, just as TV didn’t go away for now nearly a century. And if they do, they will only be replaced, no doubt, with something even more “inimical” to scholarship. So what is the alternative? Perhaps we could, rather than, spurn social media as anti-academic, seek to repurpose and redeem social media for the sake of scholarship, for the sake of truth, goodness, and beauty.

I concluded by suggesting that posts on social media, whether intended to or not, put out aesthetic articulations to which human imaginations are deeply attracted and by which they are continuously formed. Social media shape human hearts which in turn shape human action and ultimately entire societies. Such is evidenced in everything from the rise of social anxiety and teenage angst (owing largely to the phenomenon of FOMO—Fear of Missing Out) to political revolutions (e.g., the Arab Spring) and social justice protests (e.g., the #MeToo movement). If this much is true, it behooves the concerned scholar—who sees her scholarship not so much as privilege, but as responsibility—to engage today’s platforms of knowledge-dissemination and imagination-formation, i.e., social media.

Truth abhors a vacuum: should what is true remain largely in the ivory towers of academia, then the wide world of social media by default will be filled with vacuous chatter: the critic’s complaint will become prophecy. So, for the sake of the guild—where truth is to be investigated and disseminated—scholarship must be social. We will be shaped by what we love; and what we love in turn will be shaped by what we behold. Why wouldn’t we, whose work is to arrive at or at least approximate truth as best we can, display our work so that it may be beheld in order that it may be loved?